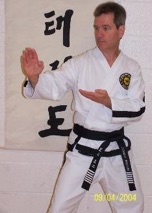 As a master martial artist, Master Terry Batch is best known for his innovative board breaking demonstrations, often showcasing unprecedented new breaks. Emily is known for creating a women’s self-defense program designed to teach simple, easy to learn techniques that can save lives. Both Terry and Emily are award-winning performers of patterns and sparring, exhibiting speed, agility, grace, and power.

Terry and Emily are renowned as outstanding instructors, sharing their love of Taekwon-Do with thousands of students over the past 37 years. They have produced over one hundred 1st degree black belts, seven which have advanced to Senior Black Belt ranks. The Batch’s also teach women’s self defense and give demonstrations to schools, boy scouts, senior citizens, women’s groups, and others. Their enthusiastic teaching style and dedication to students of all ages has inspired many to be their best in every area of their own lives.

SPECIAL HONORS
Both Terry and Emily have trained with Grand Master Choi Jung Hwa (son of General Choi, the creator of Tae Kwon Do) and with many of the world’s top Master Instructors.

Master Terry Batch received personal invitations from the late Grand Master General Choi Hong Hi himself; “The Father of Tae Kwon Do”, training with him, an honor few experience.