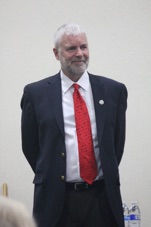 Master Geoghegan began studying Taekwon-Do in September 1977, at California State University, Hayward, under Grand Master Robert Zambetti. In 1980 he moved to Santa Barbara, California, where he began studying ITF Taekwon-Do under Master Sabree Salleh. Around 1985, Master Salleh returned to his native Malaysia, and Master Geoghegan began training with Grand Master Robert N. Wheatley, 8th Dan, who had recently immigrated from his native Ireland. Between 1987 and 1992, Master Geoghegan studied law by correspondence while traveling through Europe by motorcycle. As luck would have it, he found himself in Budapest when the Hungarian border guards opened the Austrian border, in Berlin when "the Wall" came down, and in Prague during the Velvet Revolution. All during this time, he was privileged to train with highly-ranked instructors in Portugal, Germany, Austria, Italy, and Greece, and to teach in their schools.

​Master Geoghegan returned to the United States in 1992, and makes his home in Ventura, California, where he practices law. He has been privileged to train with many of the world's highest ranking instructors, including the founder, General Choi Hong Hi and Grand Master Choi Jung Hwa, 9th Dan. Master Geoghegan has an extensive tournament résumé, and has medaled repeatedly in patterns, in sparring, and in breaking. He finally retired from the ring at the age of 44, after winning the gold medal in the men's heavyweight black-belt sparring competition at the ITF California State Championships, in February, 2000